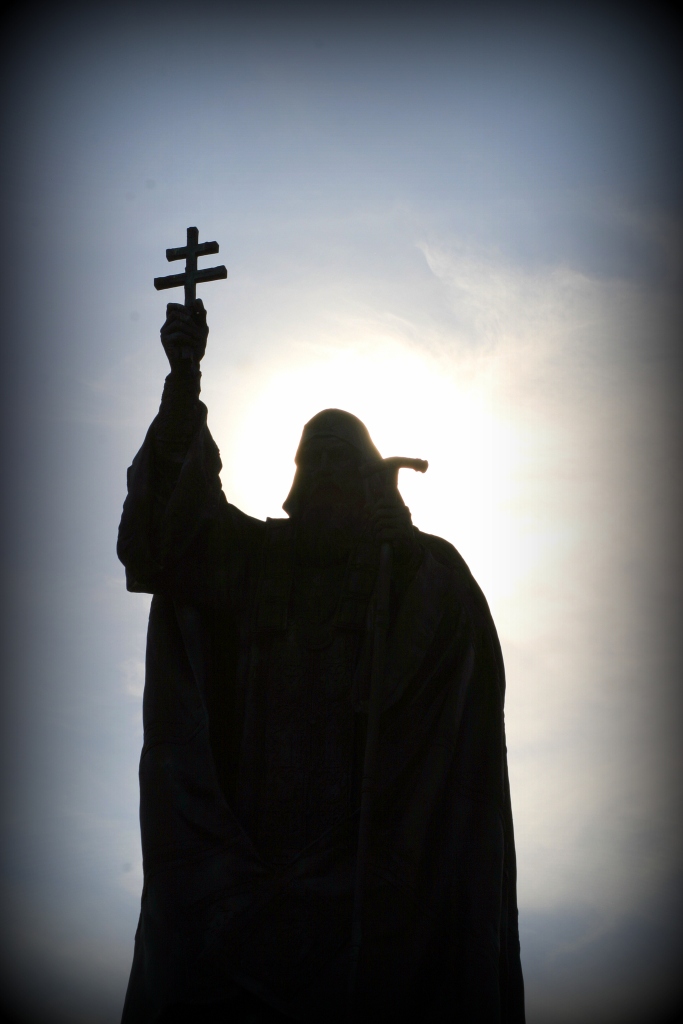 Standing near the Eternal Flame of the tomb of the unknown soldier is Saint Germogen who was the Patriarch of Moscow and all the Rus’ during the Time of Troubles. As in times past his statue stands guard along with honor guard of the Kremlin Regiment. We just happened to be present when the changing of the guard occurred. The guards who once guarded the Lenin Mausoleum , were restored to watch over the Tomb of the Unknown Soldier by the federal law in 1997. I find this very interesting since it means that the focus moved from past to the present.

The flame illuminates a bronze inscription “Имя твоё неизвестно, подвиг твой бессмертен” (translit.: Imya tvoyo neizvestno, podvig tvoy bessmerten, “Your name is unknown, your deed is immortal”).  Being here gave me great pause for all who had fallen in the Great Patriotic War, both soldiers and citizens. I’ve now stood before this flame in Vladimir, Kazan, and here in Red Square. In the small town outside Smolensk in which we stayed there was also a memorial to all those who had fallen. On the plaque were the names of over 300 people, my heart grieved.

Kremlin Guard at attention before the flame

The Eternal Flame is not unique just to Russia, they can be found throughout the world including the USA, Germany, France, Canada, India, and many other countries. Even the Cherokee Nation maintained a flame. Eternal flames most often commemorate a person or event of national significance, or serve as a reminder of commitment to a common goal, such as international peace. I found myself contemplating the situation in Ukraine wondering when peace would come for them.

Changing of the Guard

We all understand that things change. Governments, cultures, the guard, and people themselves can find themselves in the midst of turmoil and war. Why is that we pass through these events as spectators, maybe as refugees only to find that nothing changes from war except the spilling of blood of innocent people.

Wars cannot be won without leaders and great leaders understand the price of war. If peace is the goal then who will lead? I know the answer to this but will refrain for they are my thoughts only. I will leave you with a quote from Alexander the Great.

Samson wrestling the jaws of a lion