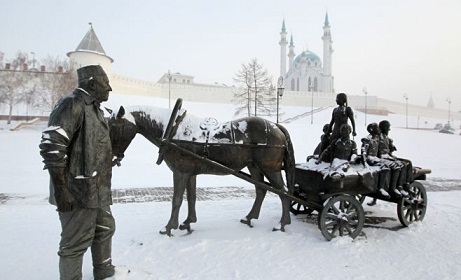 The public of Tatarstan have suffered a great loss. On the evening of 3 January 2016, Asgat Galimzianov, a legendary philanthropist who understood life as doing good deeds, passed away.

Asgat Galimzianov was born on 2 March 1936 in the village of Bulkhin Bulikhchi in the then Tatar Autonomous Republic’s Apastovo region. On receiving an 8-year-education graduation certificate, he began to work at a collective farm. Later, on serving four years in the army, he moved to Kazan and got a job as a driver at a market. Simultaneously, he worked hard as a part-time farmer, his line of business being livestock production. What money he earned he spent on charity, only keeping enough to make a living.

People whom he had helped financially are numerous, the list including older people, orphans and people in need. Asgat Galimzianov gave about 75 autos to orphanages and schools.

In his native village, he, at his expense, restored a dried out lake, built a kindergarten, bought a school bus and helped to construct a mosque and roads.

Owing to his good deeds, Asgat Galimzianov became famous far beyond the Tatarstan borders, regularly helping orphanages in Bashkortostan, Chuvashia, Ivanov region and Ukraine. He was not left untouched by the fate of compatriots affected by tragic events: radiation poisoning in Chernobyl, earthquake in Armenia, landslide in Georgia, death of Kursk submarine personnel, and South Ossetia hostage crisis. He helped as he could the people who suffered in the disasters.

“I live to do good,” Asgat Galimzianov would say. Owing to his good deeds, he was the inspiration behind the monument to a benefactor in downtown Kazan, erected in 2008.

Asgat Galimzianov was awarded the Order of Red Banner of Labour, For Services to Republic of Tatarstan, medal In Memory of 100th Anniversary of Kazan, as well as Republic of Tatarstan certificate of honour. He is a distinguished member of an Orphan Aide Foundation, and winner of a rare international award, the Lev Tolstoi Gold Medal.

“A glowing memory of the man who was a living embodiment of the word “kindness” will remain in our hearts forever,” reads the obituary signed by Rustam Minnikhanov, Mintimer Shaimiev, Farid Mukhametshin, and others.

10 thoughts on “One of Tatarstan’s Legendary Philanthropists Passes”