Only Buddhist Territory in Europe

The Kalmykia Republic is the only Buddhist region in the territory of Europe. The people, whose language is derived from Mongolian, are descendants of nomads who first roamed the steppes of Central Asia nearly eight hundred years ago, under the leadership of Genghis Khan. This alone makes it unique yet there’s much more.

Tibetan Buddhism has been professed in the Kalmykia  since the late 16th century. Through out the region you will find about 27 active Buddhist temples and monasteries (khuruls). The largest Buddhist temple in Europe is the temple “Golden Abode of Buddha Shakyamuni” which is in the city of Elista.  The temple was built on the site where a old concrete factory once stood. Once completed it was blessed by Dalai Lama XIV. The Khurul building is 63 meters in height and holds a nine-meter statue of Buddha the largest in Russia as well as Europe . Inside the first level of the temple, you can visit the Museum of History of Buddhist culture. It contains pictures and objects from Buddhism that will help you get a better understanding and feel of the religion. The second level is designed for those who want to come and meditate or just be alone with yourself and the world. See more here.

So What Makes Kalmykia Truly Unique

The  Republic is about the same size of Scotland or South Carolina, it beautiful prairies are home to a total population 300,000 or less.  Unlike other republics or oblasts, Kalmyks really do form the majority of the population – they form 55% of all the people residing here. And more than a third of them live in the capital city Elista.

Home of the Rare Saiga Antelope

The Kalmyks are not only Buddhist  but they also utterly addicted to chess and you begin to understand what an unusually unique place this really is. It’s not only home to the Kalmyks the republic’s wildlife includes the famous saiga antelope, whose habitat is protected in Cherny Zemli Nature Reserve. After the 1917 revolution, a Steppe Region of the Kalmyk People was formed. Eighteen years later, it was transformed into the Kalmyk Autonomous Soviet Socialist Republic, a full-fledged part of the Soviet Union. Kalmyks survived the Nazi occupation during World War II, followed by Soviet reprisals and deportation to Siberia under Stalin – an exile that lasted 13 years. Kalmyks were allowed to return to their native land only in 1957. See more here and here. 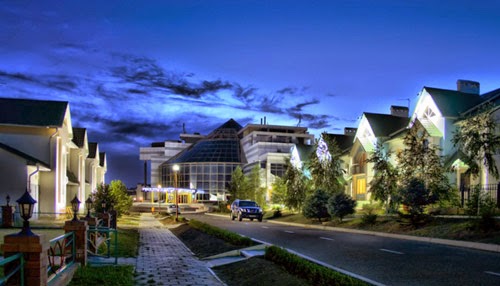 Chess City  is a large complex devoted completely to chess and chess competitions. The neighborhood-size development consists of a central, four-story domed City Chess Hall surrounded by an Olympic-style village of Californian-Mediterranean Revival Style architecture. The site has a conference center, public swimming pool and a museum of KalmykBuddhist art. The complex features sculptures and artwork devoted to chess, including a statue of Ostap Bender, a fictional character of popular books written by Ilya Ilf and Yevgeni Petrov, who proposed a creation of world chess capital. The complex has been used to host visiting dignitaries like the Dalai Lama. The entire project was the brainchild of the former president of the republic, Kirsan Ilyumzhinov. To learn more about Chess city and Kirsan Ilyumzhinov see here and here.

To finish this post I thought it would be good to show the countryside along with a short video about Elista itself, enjoy.

26 thoughts on “Would you Believe This is in Russia – Or Russia has it’s Buddhist Chess Addicts Too!”