‘Adygei legend says that once upon a time there were giants in the Caucasus. they were kind and strong creatures, and as it often happens, there were small and spiteful people near them. they were sharp, cunning, whining and artful people who were driven away by their former neighbours for their meanness and treachery. the giants gave refuge and a part of their lands to them. They were so kind that they made stone houses for their guests and they carried them on their shoulders to the most beautiful and dry places, to the banks of rivers and lakes. Instead of doors they breached round holes through which little people went hunting on lop-eared hares. However the giants were repaid for their kindness. In order to tame the giants the little people blinded them and began to give them different herbs and because of it, the giants began to lose their minds and conflict with each other. Once the giants freed themselves from charms a war began, resulting in everyone’s death with just the stone houses remaining’.

Mountains of Abkhazia. The lakes of the mountain pass Chkhy from Tengiz Tarba on Vimeo. 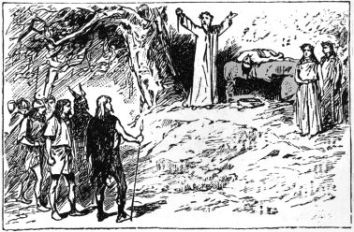 ..It was still believed, a hundred years ago, that dolmens were altars where gallic druids practised human sacrifices (see the next picture). Today everyone knows the dolmen were tombs which existed several thousand years before the Gallics.
…..In the seventeenth century, the dolmen of Santoche was called “the wedding stone “. The tradition wanted that on wedding days, the newly married couples walked in bridal procession to the dolmen.

The bride had then to climb up on one of the stones, and stand on one foot. All the guests had to kiss her. If this custom was not respected, it was said the couple could not be happy.
………Other less innocent rituals took place on the stones of the dolmen on full moon nights. It was told that priests, angry with those pagan practises, ordered these stones to be broken and knocked down.
Nowadays, it still happens that odd pilgrins come and give themselves up to strange nocturnal ceremonials. It is told too that the magnetizers of the surroundings come to reinforce theire powers and resource themselves on the stones of the dolmen.

If a dolmen featured in an old legend or folk story it was nearly always this one.

At the beginning of the seventeenth century Le Catioroc was noted as being the midnight haunt of the witches and wizards during the witchcraft trials held under Bailiff Amias de Carteret who was in office 1600-1630.

Le Catioroc was not the only ‘sabbat’ in the island. According to the ‘confessions’ of the witches, every Friday night at Le Catioroc the devil, in the form of a black goat called ‘Baal Berith’ or ‘Barberie’ sat on the centre capstone of the dolmen. The witches, warlocks and fairies danced around ‘in worship.’ Led in their revels by the terrible Heroguiazes (hags), they shouted and sang in chorus as they danced:

In mockery of the shrine of Notre Dame de Lihou on the island of Lihou.

Portuguese  legends about powerful, mysterious female makers of European stone tombs called dolmens and cromlechs. On the one hand, they were said to bestow riches and fertility on individuals, and fantastic gifts like brewing beer and farming; all they wanted in return was a little milk. On the other hand, they were described as angry snakes guarded by bulls, cursing people and hoarding the very gold of the sun.  They were imagined as beautiful cloven-hoofed snake- or bull-women, who guarded the dolmens and could speak with the dead, spin the rays of the sun, and even create the world.

4 thoughts on “Of Dolmens, Abkhazian Mountains, and other Legends.”