Once upon a time there lived a Frog. She lived in a swamp, caught midges and mosquitoes, and in spring croaked loudly together with all the other frogs. She would have lived there happily till the end of her days-if a stork did not eat her up, of course – but something happened one day which upset all her life.

She was squatting on a snag that stuck out of water, enjoying the warm drizzle. “What a lovely, wet day! How wonderful to be alive!” she was thinking.
The rain fell on her spotted, shiny back; the drops trickled under her tummy and behind her legs, and it was so pleasant that she all but croaked from delight, but fortunately remembered in time that this was autumn and frogs do not croak in autumn-spring is the season for croaking. So she bit back the croak, and went on enjoying herself in silence.

Suddenly, she heard a thin, whistling, breaking sound high over-head. There is a breed of wild ducks whose wings make a singing, or rather a whistling sound as they cut through the air. They usually fly so high that you can hardly see them, and only know the flock is there from the sound. This time. the ducks came lower and, after describing a huge semicircle in the air, alighted on the very swamp where the Frog had her home. “Quack-quack,” said one of the ducks. “We’ve a long way to go, so we’d better have something to eat here.”
On hearing this, the Frog quickly hid in the water. She knew that the ducks would not eat her, a big and fat frog, but still it was safer to duck under the snag.
But she so wanted to hear where the ducks were going, that after a little thought she ventured to poke her goggle-eyed face out of the water.
“Quack-quack,” said another duck. “It’s getting cold. We must hurry to the south, we must hurry to the south!”

And all the other ducks began to quack in loud approval. “Forgive me for butting in,” the Frog said timidly. “But what is that place where you are hurrying, that south?
The ducks flocked round the Frog. Their first thought was to eat her, but then each of the ducks decided that she was too big and would stick in the throat. And then they all began to scream together, flapping their wings:
“It’s lovely in the south’ It’s warm there now. There are such nice, warm swamps’ And such fat worms! Oh, it’s lovely in the south!”
Their excited screaming almost deafened the Frog. She got them to keep quiet at last, and begged the duck which seemed to have more sense than the others to tell her just what was the south.
And when the duck told her, the Frog thought it truly wonderful, but she was a cautious soul, and so she asked to make sure:
“Are there any midges and mosquitoes there?” 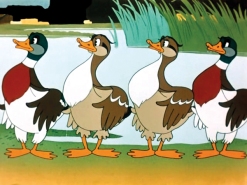 “Oh, clouds of them!” replied the duck. The Frog gave a croak,’and quickly turned round to see if any of her friends had heard her croaking in the autumn. But she simply could not help croaking, if only once. ‘Take me with you,” she said to the ducks.
“The idea!” replied the surprised ducks. “How can we take you along? You’ve no wings.”
“When are you starting?” asked the Frog.
“Soon, very soon,” cried all the ducks together. “Quack, quack, quack, quack! It’s cold here. We must hurry south, south, south!”
“Give me five minutes, will you?” begged the Frog. “I’ll be back, I’m sure to think of something.”
She flopped into the water from the snag on which she had climbed again, dived into the mud and buried herself in it completely so that nothing should interfere with her thinking. The five minutes passed, the ducks decided to take off, and in that precise moment the Frog popped out of the water near the snag, and her face beamed as brightly as a frog’s face can beam.

“I’ve thought of something! I’ve found a way,” she cried. “Let two of you take a twig in your bills, and I’ll hang on it in the middle. You’ll fly and carry me. The only thing is you must not quack and I must not croak, then everything will be fine.”
Although carrying even a light frog for thousands of miles and never quacking was not much fun, the ducks were so delighted with the Frog’s cleverness that they all agreed to carry her. They would change every two hours, and since there were so many of them and just one frog, their turn would not come too often. They found a good, strong twig, two of the ducks took the ends in their bills while the Frog hung by her mouth in the middle, and the whole flock took wing.

The Frog’s breath caught from the terrible height to which the ducks raised her; besides, they did not keep in line properly and jerked the twig. The poor Frog swung in the air like a paper clown, clenching her jaws with all her might for fear of loosening her hold and dashing on the ground far below. Even so, she soon became used to this strange position and began to take a look round her. Hanging from the twig she could not very well see the fields, meadows, rivers and hills which flickered passed very quickly, but still she could look up and see behind her a bit, so she was proud and happy just the same.
“Aren’t I clever to think of this!” she said to herself.
In the meantime, the ducks flying behind the front pair that carried her, praised her with loud cries.
“Isn’t our frog brainy,” they said. “There aren’t many as brainy even among the ducks”
The Frog wanted to thank them, but remembering in time” that if she opened her mouth she’d fall from that terrible height, she clenched her jaws all the harder and kept quiet. She swung like that all day; the ducks changed in flight, smartly passing the twig to the next pair, but it was terribly frightening, and the Frog almost croaked from 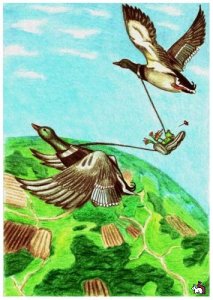 fear, but she had to be brave and brave she was. In the evening, the flock stopped for the night in a strange swamp. At dawn, they were off again, but this time the Frog faced front, and not back as before, the better to see what was below. The ducks flew over reaped fields, yellow forests, and villages where the harvest was stacked in ricks. They could hear people talking and the sound of the flails with which they threshed the rye. The people craned their necks to see the flock and, noticing something strange about it, pointed with their hands. The Frog terribly wanted to fly lower over the ground, to let the people see her and to hear what they said about her. At the next halt she said to the ducks:
“Couldn’t we fly a bit lower? The height makes me dizzy and I’m afraid I’ll fall if I suddenly feel bad.”

The kind ducks promised not to fly so high. And the following day they flew so low that they could make out what people said on the ground.
“Look, look,” the children cried in one of the villages. “Look, the ducks are carrying a frog!” The Frog heard them, and her heart leapt. 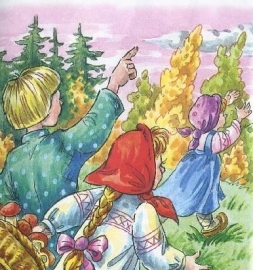 “Look, look,” the grown-ups shouted in the next village. “You’ve never seen the like!”
Could they know that it was her idea and not the ducks’, the Frog wondered.
“Look, look,” the children cried in the third village they flew over. “Who on earth could have thought of such a clever thing!”
This was too much for the Frog and, forgetting caution, she screamed at the top of her voice:
“I did! It was my idea, mine!”
And, with this scream, she went hurtling down to the ground. The ducks cried in alarm; one of them tried to catch the frog in flight, and missed. The Frog, with all her four paws jerking, fell quickly, but as the ducks had flown very quickly too, she fell not on the hard road, above which she started screaming, but further on, at the edge of the village, flopping luckily into a large, dirty pond.
She popped out of the water at once, and screamed excitedly at the top of her voice:
“It was my idea, mine!”
But there was no one to hear her. The local frogs had hidden in the water, frightened by the sudden splash. They now began to appear from the water one by one, and all stared in dismay at the stranger.

The Frog told them how she had thought all her life and had at last invented a new, extraordinary way of traveling. She had her own ducks, she told the frogs, who carried her wherever she wanted to go. She had been to the south where it was so lovely, where the swamps were so beautiful and warm, and where there were clouds of midges and all kinds of other delicious insects.
“I just dropped in to see how you were,” she said. “I’ll stay with you till spring until my ducks come back for me. I let them off, you see.”
But the ducks never came back. They thought the Frog had crashed on the hard road, and were very sorry for her.
A Story by: Vsevolod Garshin.