Deep in the heart of Yakutia 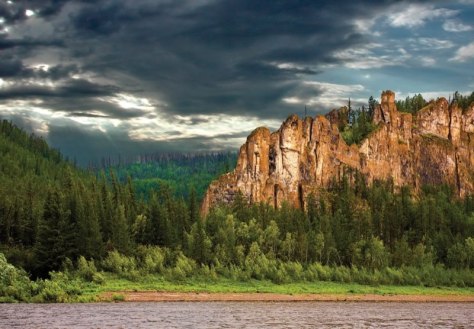 Yakutia, officially the Sakha Republic is a vast unexplored region of Siberia in the northeast of Russia is a land of extremes. Territory of Yakutia is one fifth part of Russia and the world’s largest “stateoid,”, excelling the area of Khonsyu island more than 13 times; it is 3,103,200 sq. km as opposed to second-place Western Australia’s 2,527,621 square kilometers (975,919 square miles. The population of the republic (about 1 million) can easily be be placed in one district of Tokyo city. 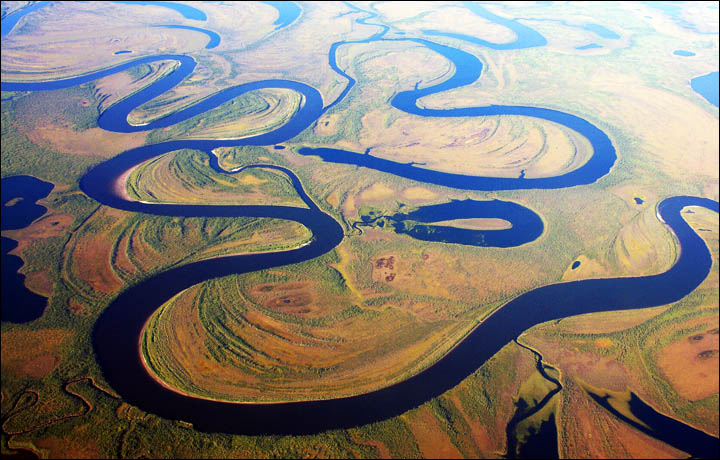 One of rarest places on Earth

Yakutia is one of rarest places on Earth, it’s where the true expanses of wild nature – mountains, rivers, lakes, taiga (forest), tundra (northern steppes) are still untouched by civilization or human hands. Centenary larches, Lena Pillars, flora and fauna that still exist from the ice age period were saved here. Scientists consider the unique horses of Yakuts, which can easily stand fifty degrees frost and find forage from under snow by themselves, if  mammoths still exist this is where you are going to find them. There are 1,850 species of higher plants in Yakutia, over a hundred of which are considered medicinal and used in official and traditional folk medicine. 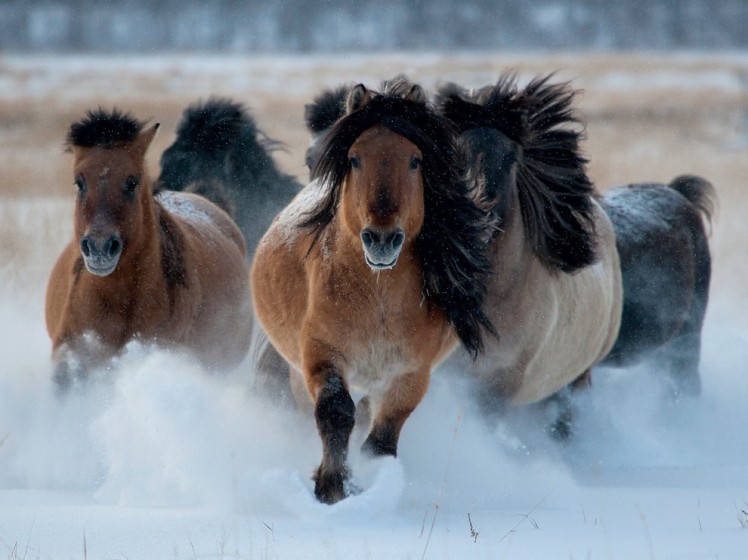 In Yakutia are so lakes that there is at least a lake per each person living here (your own personal trout lake). There are many big and small rivers, the major river is Lena that passes by the city of Yakutsk . Of all the world rivers it’s fourth by length and the second largest by river delta area. Ice drift on Lena river is an unforgettable and majestic sight and one of the most meaningful annual events in the lives of the local inhabitants if visiting in the wintertime a must see .

Ice drifts on the Lena river

There are 50 species of fishes from 18 families in river basins: lampreys, sturgeons, herrings, salmons, whitefish, graylings, carps and others.

Sturgeons on the Lena River 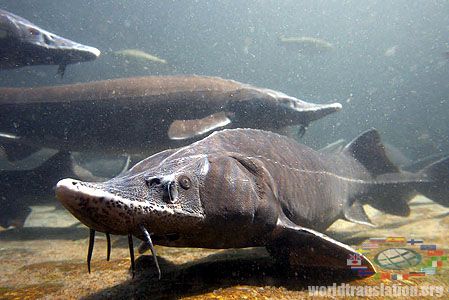 One of the many rivers in Yakutia

Wild beasts and birds here can be observed in their natural environment. 64 species of mammals and 280 species of birds live in Yakutia, and many of them are rare or vanishing. Today there are 15 species of cranes in the world, six of which call Yakutia home. These birds fly for thousands of kilometers to give birth to their young here. Siberian white crane — sterkh – kytalyk — has long be thought by Sakha people to be a sacred bird. There is a popular belief that one who sees a white crane at least once in their lifetime will be happy a person. One who sees the white crane dancing will be three times as happy. 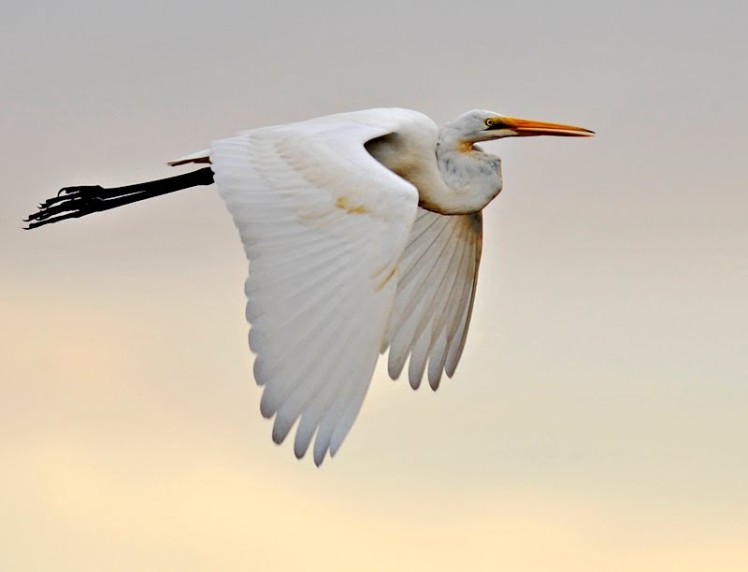 The second name of Yakutia is Sakha Republic. Urankhay-Sakha is the self-name of Yakuts. People of Sakha are the most northern and probably the most ancient of all in the many family of Turk cattle breeding peoples. The end of June is marked by Yakutian national holiday of Ysyakh. It is the meeting of Sun, summer, the beginning of another new life cycle. Besides that, Ysyakh was also an universal birthday – to add itself a year with a complete right only those could who outlived a long severe winter.

There are white nights in Yakutsk at this time – when a sun sets over the horizon only for an hour or half an hour (And beyond Polar Circle, where two fifth of the territory of Yakutia lies, Sun does not set in summer at all, which is called a «Polar day»). The holiday is celebrated in the open air, on the weekend nomad’s tents, marquees are erected, whole families, organizations, and institutions arrive for the celebration. In the day-time there are sports competitions like horse racing, wrestling, and other national sports contests. Universal unity of people is symbolized by round dance with singing of osuokhay, meaning existential circle. Dancers sing and move slowly with the motion of the Sun, as if following constant flow of life in time and space and giving the contribution of gratitude to heavenly bodies for their light and warmth given to people of Earth. The dance proceeds continuously till morning; in past osuokhay has been sung for three days and nights. It is considered that everybody in a circle is charged with energy for the year. Climax of the holiday is a ceremony of sprinkling fire, grass and trees with traditional drink made of mare’s milk – kumiss. The ritual symbolizes the birth of Universe and Man. 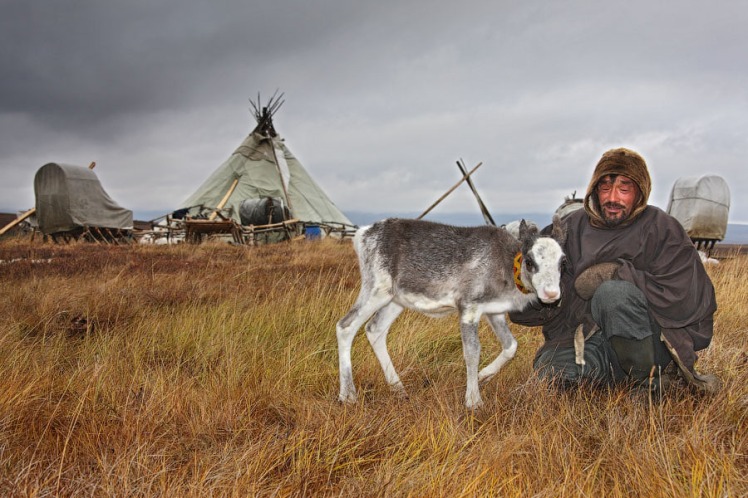 Besides Yakuts-Sakha, representatives of other nations of Russia and CIS countried live in Yakutia, as well as northern minorities: Evenks (hunters and reindeer breeders), Evens (reindeer breeders), Yukagirs (hunters and fishermen), and old Russian residents (fishermen and hunters) with traditional way of life practically unchanged since the 17th century.

The capital of Yakutia is the city of Yakutsk, one of the oldest of Siberia, which was founded in 1632. About a quarter of the total population of the republic live in Yalutsk. Here you will find that there are hotels, restaurants ( Japanese cuisine as well as Russian, Italian, and Sakha traditional are all found here), nightclubs, theaters, cinemas, museums, shops and supermarkets, Web cafes, and mobile phone companies. Once you leave Yakutsk, civilization ends with paved roads. If you are backpacking prepare to pass the night in a tent or farmhouses (as guests of a local resident), don’t bother to take a car since the roads are impassable, if you have the money flying by helicopter is a choice, paddling by canoes and kayaks is possible , or you could even ride a horse or even possibly a reindeer. Be ready to dine on canned food, a packed lunch, if you are a fisherman try fresh fish soup boiled on the fire or simple dishes from meat, game birds, fish, cereals, potato, flour.

Oymyakon the “Pole of Cold”

If you are looking for the exotic you need look no further Yakutia for it is truly an amazing landscape. Almost 100 percent of Yakutia is located in a permafrost zone. In July, Yakutsk matches Tokyo with temperatures reaching nearly forty degrees Centigrade, winters can reach to – 50 degrees. This part of Russia reflects a sharp continental climate of extremes.  It is Yakutia where  the “Pole of Cold” is , Oymyakon is the coldest inhabited place in the northern hemisphere, in 1924 Academician Sergei Obruchev recorded the lowest ever temperature for our hemisphere — minus 71.2 degrees Centigrade. In Yakutia one can see such unique phenomena as Aurora Borealis, also known as the northern lights. It’s here, beyond the Polar Circle, the long dreary nights lasts all winter, and many days of the summer the sun never sets, and if you are brave enough to go  mushroom hunting  in tundra they can grow to unbelievable heights.

A mushroom hunter and her silver glasses

Along many river banks in Yakutia, you can find a fossilized trilobites, a foot  imprint of an extinct mammoth or even extinct woolly rhinoceros bones.  Yakutia is riddled with archaeological sites of ancient people as well as  ancient cave drawings. You can also watch competitions where fish are pulled from frozen rivers, learning to lasso a deer, even watch the indigenous people offering up prayers to spirits of nature.

There are many enigmatic and mysterious places with incredible energy found in Yakutia. Kisilyakh rocks are one of the more distinctive natural phenomena,  Lena Pillars, hundreds of lakes with undefined depth, unusual sand formations posing like miniature desert. From every corner and for hundreds of years Sakha folk tales and legends have been told and retold to every generation. 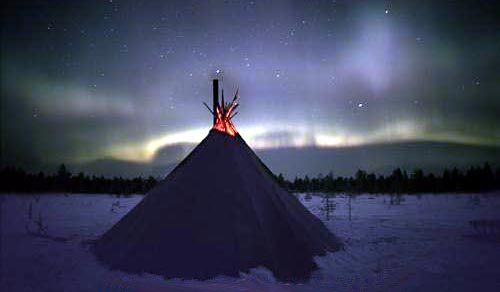 Yakutia is one of few places left on Earth where it’s clearly still felt that our planet is a living thing. It’s amazing beauty and peacefulness will bring any visitor the desired results they are looking for.