I would like to preface this post by saying that I’m not trying espouse any political  agenda nor state my own religious beliefs with the following article. What I did find fascinating is the idea that a country’s values can change and swing to polar opposites as can be seen here. I’m also betting that there will be those who will dispute the information and even be offended. The re-post may do so but is designed to provoke thinking and open discourse to look at what is really happening and why. What is truly the reality? I’m looking forward to see the reaction and hear comments.

Is Russia more Christian than the United States?

Today, in the New York Times, Vladimir Putin invoked God quiet emphatically and certainly intentionally. He wrote “We are all different, but when we ask for the Lord’s blessings, we must not forget that God created us equal.”

Earlier this year Barack Obama skipped Church on Christmas Day while the President of Russia, Vladimir Putin, on January 6, 2013, attended mid-night mass services celebrating the Russian Orthodox Christmas in grand splendor in the traditional Vigil liturgy in Saint Christ the Saviour Cathedral in the presence of 4,000 people, including Patriarch Kirill. The Russian Orthodox Church celebrates Christmas following the old Julian calendar, which is 13 days “behind” the Gregorian calendar. 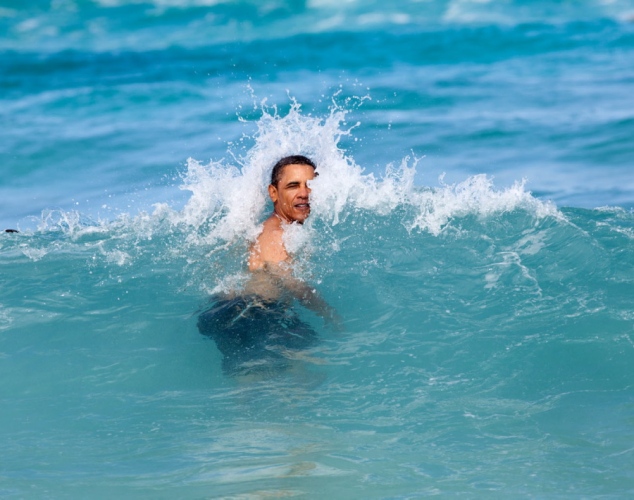 While Russian leaders were attending Church services, half way around the world in America, Chicago Tribune, writing about Obama’s troubles finding a Church for his family, said “But as his (Obama) fellow Christians around the world attended Christmas services on Wednesday and Thursday, the president-elect and his family remained sequestered at their vacation compound on the windward coast of Oahu. His lack of attendance at formal religious services showcased a dilemma faced by Obama, who is between churches and often expresses concern about bringing the disruption of his security detail into the lives of others.” According to the same report President Barack Obama has not attended a public church service since before being elected.

So what you say? Well, today Russia is investing $100 million to rebuild Christian churches throughout the country. Money to rebuild theses churches is coming from Russian tax payers. This would be impossible in the US of course. Imagine the US Media’s reaction if President Obama decided to invest $100 million dollars of US tax payer dollars to rebuild Catholic Churches. In the US there would be outrage yet Russia citizens are supportive of the investment.

Russia’s turn to Christianity is a almost unknown phenomenon in the United States. Most Christian leaders are oblivious to what is happening in Russia. Pastor Robertson or Pastor Hagee still believe Russia is an atheist and communist country and these prominent End-Times Christian pastors are raising money and rattling their sabers to go to war against the Godless state.

But the reality is Russia is indeed rebuilding Churches with tax payer funds. MinistryValues.com, in another piece, wrote “In addition to the formal exchange of wishes and thanks with the Patriarchate of Moscow, the Russian government gave the Christian Church a dramatic Christmas gift. Meeting with the patriarch at the Danilov Monastery, Russian Prime Minister Vladimir Putin announced that the government would provide almost $100 million US dollars (RUB 2 billion) to restore holy sites, monasteries and churches destroyed during last century’s atheist drive by the Soviet Union against religion. He also said that the Novodevichy Convent, one of most beautiful and important in the country, would be given back to the Patriarchate. 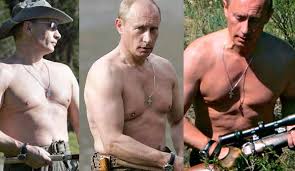 Vladimir Putin and Dmitry Medvedeve go to Church often, kiss precious icons of the Virgin Mary and seek political and moral counsel from the Russian Orthodox Clergy. Furthermore, to the surprise of many Americans, particularly Evangelical Christians, Vladimir Putin wears a Christian cross with him at all times.

From a Larry King Live interview Putin told Larry King: “I was surprised completely when one of the workers, just muddling through those ashes of the remnants, found that cross intact. And the house fell, that was a surprise, a revelation, and I always now keep it with me. ” 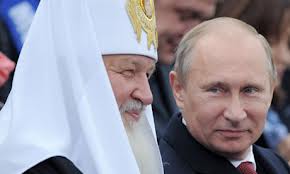 Vladimir Putin has frequently praised the Christian Russian Orthodox Church for “educating citizens in a spirit of patriotism and love of country, passing on love for spiritual values and history.” For his part, Kirill said that he hoped that the Lord would help Putin “in performing the high task God gave him.” The patriarch also praised the prime minister for the way he managed the economic crisis, which has had a greater impact in Russia than elsewhere in the world.

Patriarch Kirill Patriarch at a special ceremony awarded the Special Strategic Missile Forces (RVSN) a pennant with the image of the Holy Great Martyr Barbara, the heavenly protector of the branch. The Patriarch conveyed the award to Lieutenant General Andrey Shvaichenko, RVSN Commander, at the Peter the Great Strategic Missile Forces Academy in Moscow on Tuesday when opening the conference dedicated the Academy’s jubilee.

Infax reported also that the Patriarch, speaking of Russia’s nuclear asresanl “is convinced “such dangerous weapon can be given only to clean hands –hands of people with clear mind, ardent love to Motherland, responsibility for their work before God and people.”

He believes it is not by chance that systematic cooperation of the Russian Church with the Russian Armed Forces started with the Strategic Missile Forces in early 1990s.

Not a big tent in Russia – Restrictions on Evangelical Christians

Funding to restore Christian sites and the return of properties seized from the Church in Soviet times are but the latest gift of the Kremlin to the Patriarchate. This year, the Russia Justice Ministry will present plans to amend the laws on “Freedom of Conscience and Religious Organisations”, which, if approved, would severely restrict the activities of certain religious communities, like Evangelical Christians. In addition, the authorities plan to add religious education in public schools as well as chaplains paid by the state to the armed forces. It also appears possible that the Orthodox Patriarchate of Moscow will be granted the right to vet parliamentary bills before they go to the Duma.

Is the Russian Government building a more Christian society? Perhaps. But try telling that to your buddies at Church this Sunday.

This post was re-posted and authored   By Stephen K. Ryan – Author of “The Madonna Files”

K' CLIPs
For The God of Super Freaks