The Kungur Ice Cave is located in near the ancient Russian town of Kungur, and stretches under the ground for over 6 kilometres. There are several dozens of grottoes in these passages, the largest of which is known as the Friendship Grotto. 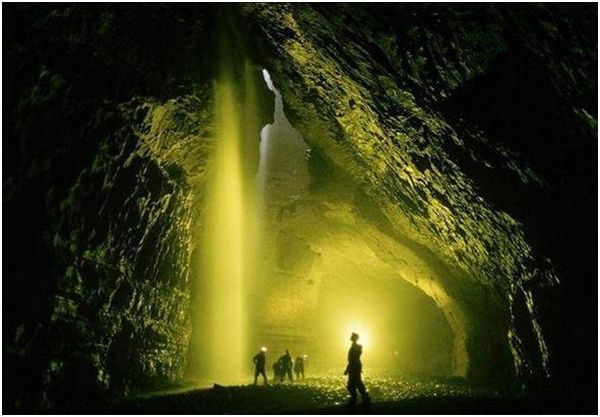 The Krubera Cave (or the Voronya Cave, sometimes spelled the Voronja Cave) is the deepest known cave on Earth. It is located in the Arabika Massif of the Gagrinsky Range of the Western Caucasus, in the Gagra district of Abkhazia.

Ordinskaya or the Orda Cave has status a of All-Russia natural monument. It is the first and the world only underwater gypsum excursion cave, member of I.S.C.A (Association of Excursion Caves of the World). In 2008 Orda cave was applied to be included in the List of UNESCO World Natural Heritage. Unique beauty of Orda cave was marked by the world-famous British cave-diver, cave-diving instructor of the Royal court of Great Britain and Martyn Farr. The cave is located in the western Urals region of Russia and consists of almost 5 kilometers (3 miles) of dramatic natural channels with water so clear divers can see over 45 meters (50 yards) ahead of them.

In the far east of Russia, on a peninsula called Kamchatka, are stunningly surreal-looking ice caves that are formed under incredibly interesting conditions. Fire and ice are involved, or volcanoes and glaciers. As EPOD states about one, “It was formed by a stream flowing from the hot springs associated with the Mutnovsky volcano. This stream flows beneath glacial ice on the flanks of Mutnovsky. Because glaciers on Kamchatka volcanoes have been melting in recent years, the roof of this cave is now so thin that sunlight penetrates through it, eerily illuminating the icy structures within.” 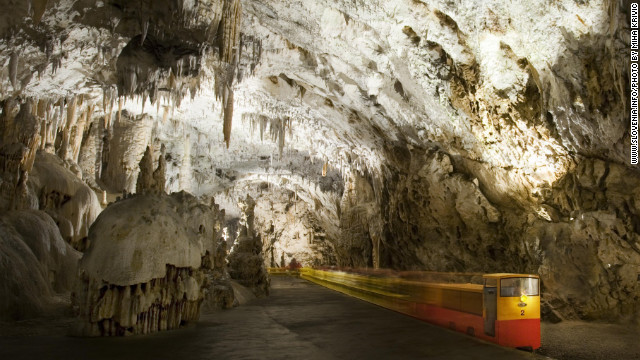 Visitors get to see about 5.7km of the cave on 1½-hour tours; some 4km of this is covered by an electric train, which runs as far as the Big Mountain (Velika Gora) cavern. Here you stand under one of the five signs identifying your language, and a guide escorts you through halls, galleries and caverns. These are dry galleries, decorated with a vast array of white stalactites shaped like needles, enormous icicles and even fragile spaghetti. The stalagmites take familiar shapes – pears, cauliflower and sand castles – but there are also bizarre columns, pillars and translucent curtains that look like rashers of bacon

One of the most beautiful karst caves in the world, located in the bowels of the mountain massif Chatyrdag south-east of Simferopol, Crimea, the Ukraine. According to the legend, the cave was discovered in 1987 by a shepherd who was looking for some lost sheep. The Marble Cave is undoubtedly one of the most famous caves of the world which has great beautiful halls. Visible from various points and distances, the picturesque silhouette of the mountain is a symbol of the Crimea. Anyone who gets here is amazed by the multiplicity of the charm and picturesque various sinter formations and crystals. The length of the routes equipped with marble are a mile and a half. The length of all the explored rooms are more than 2 km, and the depth is of 60 meters. The tour begins in the gallery of fairy tales, so named because of stalactites, stalagmites and sag whimsical, fantastic forms.

In the Crimea you can see one of the largest caves in Eastern Europe – Red Cave (Kizil Koba), formed on limestone. If you visit Ukraine this place is worth seeing. The name of the cave can be translated as Red. Dominating color inside is all shades of red as pure white calcite is stained by lots of traces of iron in in rock. It’s so amazing to see how nature indicates its presence in a cave because it is decorated with stalactites, stalagmites, carnalities and ordinary cobblestones and presents itself as a complex with lots of intricate tunnels and halls. On the lower floor of the cave the deepest underground river Sioux-Uchkhan flows. There is also lots of waterfalls and lakes. Beside that in the cave there were tracks of primitive people parking, who were living few chiliads ago. The length of the equipped part of the cave, available for excursions is 500m. You can also scuba dive and see that part of the cave, which is blocked with siphon (corridor U-shaped, filled with water). Extreme feelings are guaranteed!

Photographer Oleg Grigorev has given a rare insight into the glittering caves of Mlynki, where hundreds of thousands of crystals adorn the walls. You could be forgiven for thinking fairy lights have been installed in these caves, but the twinkling walls are entirely natural. These incredible pictures give a rare glimpse inside one of the world’s most beautiful caves, where the walls are lined with crystals. Oleg Grigorev braved a 12m (40ft) drop to get inside the Mlynki cave near Ternopil, Ukraine, where the 33-year-old spent three hours crawling through a labyrinth of passages to capture these shots.

Complex of Imereti caves is located at a distance of 10 km from the town of Kutaisi and the area of the complex is about 354 hectares. The Sataplia itself is located at 500 m above sea level. Karst caves can be found in this territory. Famous for fine speleothems and the dinosaur footprints – the Karst Cave Sataplia is located at 500 m above sea level in Georgia. The cave is named after Mt. Sataplia (494m asl), an extinct volcano, which is now a Nature Preserve. The preserve was intended to protect the five karst caves of the area and the dinosaur footprints. There are beautiful stalactites and stalagmites. Near the cave is the speleogical museum. Sataplia cave was discovered in 1925. In 1933 there were discovered traces of dinosaurs that were 120 million years old. At the moment there are 200 footprints known, found in two different layer of the Cretaceous limestones. The 30cm long footprints of the lower layer belong to an unknown predator, the 48cm long footprints of the upper layer to an ornitopod herbivore. 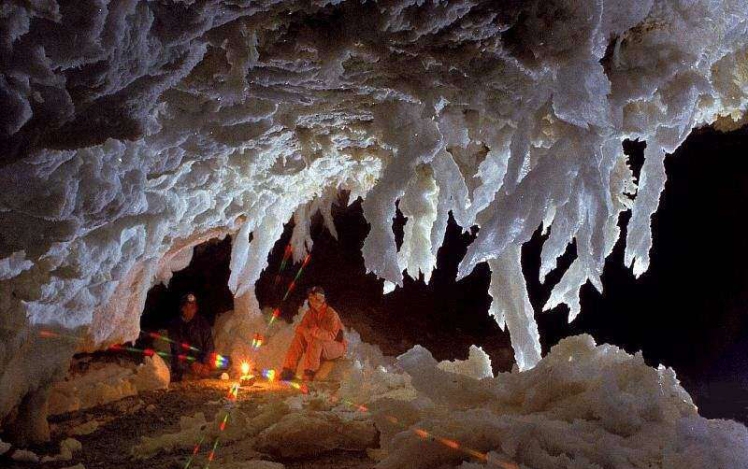 Kaptykan (Kap Kutan) Cave, part of the most extensive network of limestone caves in Central Asia. The caves were already mentionned by the Greek geographer Diodorus Siculus They were used by smugglers in the 18th and 19th centuries and explored by Soviet geologists Yalkapov and Maltsev. The first hall of the Kaptykan Cave is known as ‘Father Christmas and Snow Maiden’ because of the two huge figures formed by the stalactites and stalagmites.