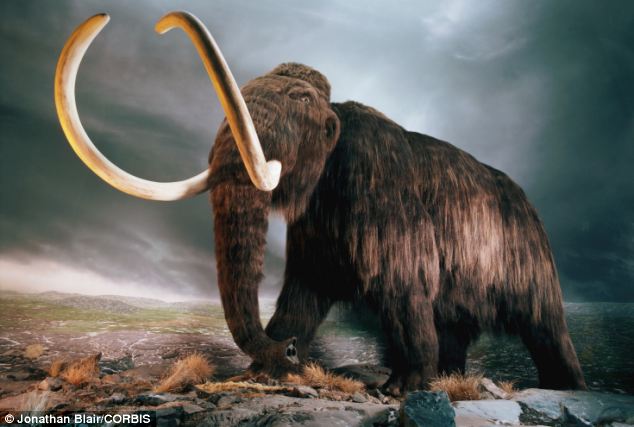 A released footage of a possible Woolly mammoth was done anonymously for the first time back in 2012. The incredible footage was filmed by a government-employed engineer last summer in the Chukotka Autonomous Okrug region of Siberia. He was in the remote area to survey for a planned road when he caught this on tape. The Russian national said he wanted to draw attention to the fact that woolly mammoths still exist in the vast unexplored wastes of Siberia. He explained that the discovery of the extinct animal still being alive in Siberia would not be music to the ears of the Russian government. He further added: ‘If woolly mammoths were found surviving in Siberia, it could run against the governments plans to further develop and exploit the area’s considerable resources.’

It is well known that the Woolly mammoths roamed the Earth up until 10,000 years ago during the last Ice Age, some scientists believe the last of the animals died out 3,500 years ago. But evidence has also found that the last mammoths to exist were the ones on Wrangell Island which lived there up to around 1,800 year ago. So why isn’t it possible for the Woolly Mammoths to still exist? Paranormal writer Michael Cohen said Siberia is a vast area, and the possibility that it could contain many undiscovered species. Whether it contains woolly mammoths was another question. The 41-year-old Cohen said: ‘It is highly possible that a number of species, extinct elsewhere, could survive in the area undetected.

The following jaw-dropping footage shows an elephant-shaped animal with reddish-brown fur — that closely matches the color of mammoth hairs. This can be shown from the previous findings that have been dug up from the perms-frost across the upper straits of Russia – the footage appears to show the beast moving across the river with its trunk swinging from side to side, the filming is said to have taken place in the Chukotka Autonomous Okrug region.

Not being one to believe just a single video I searched the archives for evidence that would support this claim. What I found was this, the Great grand daughter of WW2 Military photographer, Holger Hilderbrand after being captured by the Red Army at the battle of Stalingard shot a short film in which was taken 45 kilometers south east of Yakutsk in the Sakha Republic of Russia. The Sakha Republic and the Chukotka Autonomous Okrug neighbor each other which gives a bit more credence to the first footage that was taken more recently.

Then I went and found a second analysis of the first video that supports the possibility  of mammoths existing today. Finally I searched the records for where some of the past finding of frozen specimens of mammoths have been found which is shown below.

The indigenous Evenk tribe of northeastern Siberia were first contacted at the turn of the century by Russians who reported that they had well-preserved mammoth skins. The Evenks ‘faithfully described the appearance and behavior of the mammoth to astonished ethnographers, and even detailed the beast’s diet and how they hunted it.’ A Russian expedition in 1922 recorded accounts of mammoths being alive—from the same tribe.

This shock has caused researchers to consider whether, if they could have been that far out, mammoths may have survived even longer in the unexplored forests of Siberia.

39 thoughts on “Jawdropping evidence that “Woolly Mammoths” might still exist.”