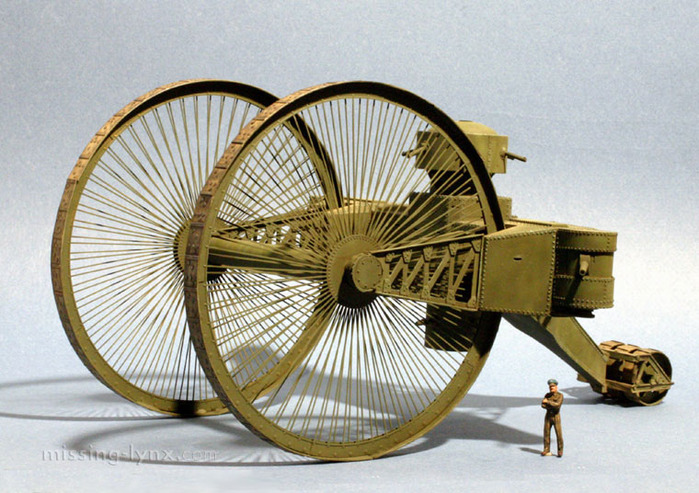 The “Netopyr” also known the Tsar Tank was a unusual invention intended to be a weapon of war. This strange looking Russian armored Tricycle tank was developed in 1916-17. It received its nickname because whenever carried, this vehicle looked like a bat hanging asleep. But was not the reason, why it was different from contemporary tanks and did not use caterpillar tracks; rather it used a tricycle design. Initially, the vehicle was considered underpowered and susceptible to artillery fire. Its two front spooked wheels were nearly 9 meters (27 feet) in diameter; the back wheel was smaller, only 1.5 meters (5 feet) high, triple wheel, to make sure maneuverability. The higher cannon steeple stretched to nearly 8 meters high. The hull was 12 meters wide with two more cannons in the sponsons. Extra weapons were also premeditated beneath the front. Each wheel was powered by a 250hp shaft engine. The enormous wheels were designed to overcome rough terrain. However, due to miscalculations of the weight, the back wheel was prone to be stuck in soft ground and swamps, and the front wheels didn’t have enough power to pull it out. This led to a fiasco of tests before the high commission in August 1915. The tank was abandoned in the same location where it was tested, some 60 kilometers from Moscow until 1923, when it was finally taken apart for scrap. 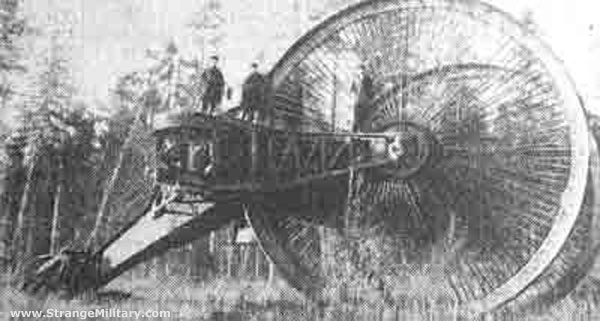 2 thoughts on “The “Netopyr” – Unusual Russian War Machine from the past.”