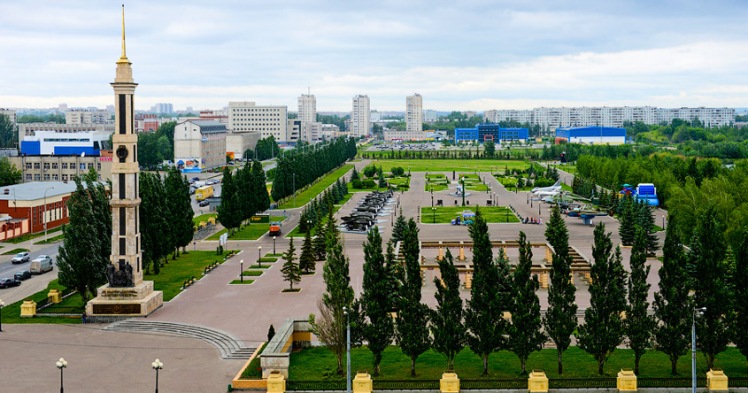 Victory Memorial Park is located in the center of  the city of Kazan within the Novo-Savinovinovskogo district, it can be found at the  intersection of Prospect and Bondarenko Yamasheva Husain. This park is a memorial to the Heroes of the Great Patriotic War and is of great national importance. The park itself covers an area of ​​approximately 50 hectares that houses a open-air museum of military equipment that fought in the battles of the Great War. The military equipment that can be found will be such things like combat vehicles, artillery, aircraft, tanks and such. The obelisk seen in the left foreground has at its foot a bronze warrior with a sword and a woman, a mother with a baby in her arms on the other side. Behind the trees rests a memorial to the Heroes of the Great Patriotic War. At the center lies an eternal flame designed to immortalized the names of the 200 Kazan natives of the Republic. They were awarded the title of Hero’s of the Soviet Union, the Knights of the Order of Glory 29.

Development of the park began in the 1970s during the 20th century. In marshy areas 1418 trees and shrubs were planted for the number of days and nights of the Great Patriotic War took place. During 1990’s because of the reconstruction that Russia was going through the master plan for the park was not able to be achieved. But since those year the city was able to build the memorial and were also able to create a museum of military equipment that fought in the battles of the Great War. Construction of the memorial was started and completed in 1995 for the 50th anniversary of the Victory in the Great Patriotic War.

Also within the park  a small picturesque lake was created. Swimming in this lake isn’t allowed, but to lie-sunbathing on the bank or lying down in the shade of a jasmine bush is never discouraged. Ducks are often found on the lake not only swimming but nesting too. It would not be an uncommon sight to see patrons feeding the ducks which will come up and eat right out of your hand. You might even find some visitors fishing on the banks of the lake which has been stocked with fish.. Recently, the Lake  was used for racing radio controlled model boats. In 2006  the championships of Russia were held on this lake for this unusual sport. 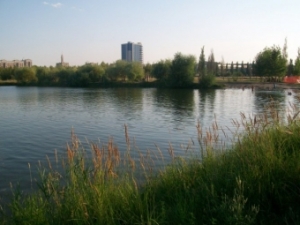