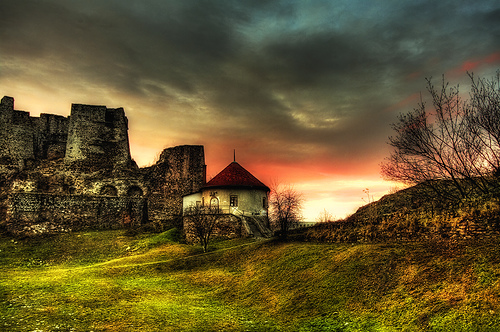 You can see Šariš Castle sitting atop an almost volcanic looking flat-topped mountain from miles away. From a distance, the silhouette of the castle perched above Veľký Šariš was none too impressive. However, after hiking an hour or so from the village center, up a path winding around the mountain, it became clear I had underestimated. The castle consists of a mid-restoration wall surrounding, undulating, lush, green grounds dotted with benches, brambly trees, and of course, the occasional tower or other remains from the 13th century icon.

This castle contains more greenery than most others in Slovakia, and appears to be just as much public park as historical site as people we’re barbecuing within the walls with no apparent reprimands. The 360 degree views make the meandering walk up to the building worth the 60 minutes of work, and it is even possible to see the High Tatras poking over the surrounding hills…….

(not many in Russia, but in former USSR, Ukraine was part of Russia)

Of all the things that one would not expect to find in Russia a castle would be one of them. This obscure castle was once the delight of Colonel Vladimir Khrapovitsky who after traveling to Europe in the 1880′s found himself being confronted by Frenchmen who would state that, “there are no castles in Russia”! It all came to a head when he made a bet with a notorious French Landowner….